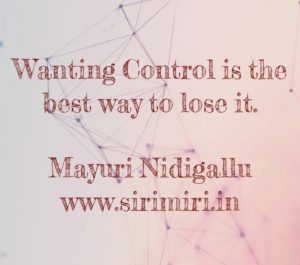 Have you ever tried to hold a fistful of sand? If you have, you must have realized that the tighter you grasp it the faster it slips out from your hold. The sand keeps slipping out till you are left with a few grains that have remained because they were too far behind to escape, while the rest of your hand is empty.

Wanting to control everything is much like holding a fistful of sand. You think you are the one in control, but the sand slipping out despite your grasp makes you realize otherwise.

Wanting to have control of your life is not a bad thing. Wanting to control everyone else’s is another story. There is a difference between helping out and controlling.
You are helping out when you are asked to help, or asked for suggestions or advice.
When you think you know better, when you want to make decisions for others, when you want others to follow your diktat, these are the traits that should make you realize that you are not helping out but wanting to control.

More often than not, people who are controlling when not ‘obeyed’ tend to ‘punish’ the people they control. By ignoring them, by cutting off communication and other similar ways. These actions either break the other person down or breaks the relationship of both the people, the one controlling and the one in control.

Controlling gives the person a false illusion of being in charge, when the fact is the exact opposite. The more you control the more you lose. Remember the fistful of sand?

Let people be. Set them free, so that they want to come back to you rather than be forced to come back. Let people make their own mistakes, let them learn for them.

Replace control with compassion and watch life change. Your life.

Linking up with  #MondayMusings

9 thoughts on “On Control #MayTivation #MondayMotivation”