Book Review: The Pearl That Broke Its Shell 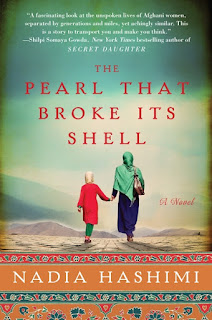 With her debut novel, Nadia Hashimi takes us to Kabul where women were child brides to men thrice their age, were rarely the first or only wives and were treated depending on the number of sons they gave birth to.
Rahima is the 3rd  of 5 sisters. Of a father who fights for a warlord, when he isn’t delirious on a drug high, and a mother who lives in the perpetual guilt of having given birth to 5 daughters and under her mother-in-laws constant threat of getting her husband remarried.
The lack of a male child forces her mother to covert Rahima into a ‘Bacha Posh’, a custom where a daughter is dressed and allowed to live like a son, till she attains puberty. Treated as a male Rahima, who is now Rahim, tastes freedom and realizes she likes it even as she notices the lack of it given to her own kind.
Though the story telling of her feisty aunt Rahima discovers  that she isn’t the only Bacha Posh in the family and her great-great-grandmother, Shekiba was the first. From here starts Rahimas fascination for Shekiba, women who lived 100 years apart.
A foolish mistake on Rahim’s part leads to her angering her father, who marries off three of his daughters at one go, and Rahim is back to being Rahima, and the fourth wife of the warlord her father works for.
From here on starts 13 year old Rahima’s struggle. Her life drawing parallels to Shekiba’s life, the story she seeks inspiration from and which becomes her strength.
A simply written book that shows us that a society is  oppressive because women make other women miserable and it is only women who can make things better for their kind.
Read it to gain inspiration from women who do not let society or their ‘naseeb’(destiny) dictate to them. Read it for the strength of will, even though the body is weak. For that tiny glimmer of hope and heaps of courage that keep these women going despite all the atrocities committed on them.
Read it to realize that Khaled Hosseini has set a trend for Afghan writers to bare the scars of their battle torn country they are all so proud of.
Read it. Just read it.
Spread the love