Book Review: The Diary of a Social Butterfly by Moni Mohsin 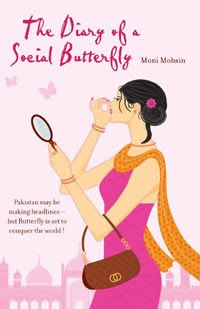 In her own words, Butterfly is ‘sophisty, smart and socialist.’ Her friends, Mulloo, Flopsy, Furry and Twinkle are ‘always doing competition’ with her.
According to Butterfly, those who’ve studied at Oxford come back ‘three years later an Oxen.’ She laughs till she becomes ‘historical’ says ‘Thanks God’ to not have been ‘knocked up by a truck’ wishes to meet ‘business typhoons and textile magnets’ and exclaims ‘What cheeks!’ when startled.

Butterfly calls her husband Janoo publicly, and ‘buddhi rooh / zinda laash’ privately and she has an Aunt called Pussy, who has a twice ‘die-vorced’ son called Jonkers.

A compilation of Pakistani newspaper columnist, Moni Mohsin’s, popular column of the same name, this book is a hilarious insight into Pakistan’s high-society through the eyes of the adorable, amusing, silly, ardent misspeller and lovable protagonist called ‘Butterfly’
This is one book you shouldn’t judge by its, rather garish, cover. Though you do have a better chance of enjoying the book if you are fluent in /can at least understand Urdu.

2 thoughts on “Book Review: The Diary of a Social Butterfly by Moni Mohsin”